Award season kicks off on a high for American Hustle 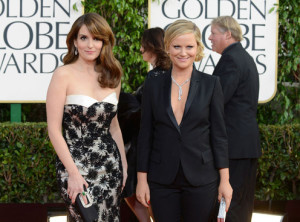 Last night saw the kick off of what has come to be known as “Award season”. Sunday, January 13 saw the 71st annual Golden Globes awards that seek to honour and reward the best films and TV, held at the swanky Beverly Hilton Hotel. Hosted by last year’s Tina Fey, who quipped: “This is Hollywood. If something kind of works, they’ll just keep doing it until everyone hates it.”, together with Amy Poehler were back for the second time as anchors of this glamourous event filled with the biggest names in the entertainment industry. Poehler went on to win a gong for her role in Parks and Recreation.

American Hustle proved the firm favourite at last night’s awards show, with three honours heading their way, including best musical/comedy. South Africa got a mention during the awards ceremony when rock outfit U2 got the gong for original song for their composition of ‘Ordinary Love’ from the biopic of the late former President Nelson Mandela, Mandela: Long Walk To Freedom.

Despite an earlier mishap of a burst fire sprinkler that saw the world-famous red carpet drenched, the award ceremony went off without a glitch. The red carpet was ready for the stars to grace in time.

If you missed all the live action, there will be a repeat tonight. Check your local tv guide for the times of rebroadcast.

Below is the FULL LIST of all the night’s big winners.

ACTOR IN A DRAMA

ACTRESS IN A DRAMA

ACTOR IN A MUSICAL OR COMEDY

ACTRESS IN A MUSICAL OR COMEDY

SUPPORTING ACTOR IN A DRAMA, MUSICAL OR COMEDY

SUPPORTING ACTRESS IN A DRAMA, MUSICAL OR COMEDY

Winner: Alex Ebert (All Is Lost)

Winner: Ordinary Love by U2 and Danger Mouse (Mandela: Long Walk to Freedom)

Winner: Michael Douglas (Behind the Candelabra as Liberace)

Winner: Elisabeth Moss (Top of the Lake as Robin Griffin)

Winner: Behind the Candelabra

Investment Of Funds- All You Need To Know

What Changes Will South African Pension Funds See In 2019?

What Are The Best Things To Invest Your Money In – 2019