With the launch of the new Lumia 1520, Nokia has thrown down the gauntlet. With the past year being characterised by the Finnish giant’s “aggressive” marketing of its Lumia smartphones, Nokia has moved to become proactive in protecting its share of the market. 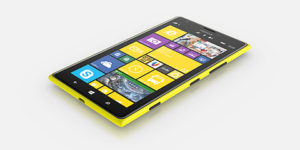 Not allowing Samsung to get all the glory, Nokia has launched its Lumia 1520, a super-sized phone (phablet) that is meant to give Samsung’s Galaxy Note 3, a run for its money. Currently, 44% of the market belongs to Nokia in South Africa, and there has been a concerted effort to grow its Lumia business.

Featuring a number of firsts for the Windows phone, the 1520 is the first Lumia smartphone to sport a full HD 1080p display; the first to run on Qualcomm’s Snapdragon 800 chipset; amongst other things. The Lumia 1520 has a whopping 15.2cm display and weighs in at 209g. Boasting a 20-megapixel PureView camera, the Lumia 1520 came second only to its predecessor, the 1020, beating the iPhone 5S in most conditions.

Lumia 1520 comes with 32GB of internal memory, with the option to increase memory via a SD Card being available to the user. With the battery coming in at 3.400mAh, the Lumia can handle your entire social/call needs.

In the end, the Lumia 1520 has everything going for it – a great design quality, top-of-the-line hardware specs, the second best camera on a phone in the industry, unreal battery backup, great call quality and overall, a brilliant entertainment device, but the notification centre makes all the “fun” a bit of a mess to navigate. The lack of a Facebook app is probably the most obvious of oversights

Creating A Budget And How To Use It